The Internet can’t get enough adorable cats, inspirational quotes and quirky anecdotes, and these Austin musicians’ Twitter pages are full of them. If you don’t already follow these local songwriters, it’s time to click the little blue button. Sonic discovery and hilarious memes await.

David Ramirez doesn’t just pen vulnerable lyrics; he encourages his fans to do the same. In a recent Twitter conversation, Ramirez asked his followers to tweet their favorite lines they’ve ever written. Responses ranged from the deeply personal to the beautifully witty. If you ever wanted to know what a day in the life of Ringo Deathstarr looks like, their Twitter page offers a comprehensive play by play. These musicians clearly love social media. It’s not rare to see ten posts in one day. Sure, Ringo Deathstarr’s memes, concert updates, selfies, and youtube videos may overtake twitter feeds, but they’re always a welcome distraction. Lovers of celestial space rock should rush over to Sphynx’s Twitter page. Psychedelic portraits from past performances speckle their site and inspire bubbling excitement for their upcoming shows.

The Eastern Sea’s Twitter page is as colorful as their brassy brand of pop music. Splashed with album updates, hilarious vines, and unwavering support for the Houston Texans, their social media landscape is a perfect place to relaxed your overworked brain.

Ruby Jane always make the crowd feel like her best friends, and her Twitter page is no different. This fiddle aficionado loves to snap pictures of Sir Winston the puppy and share behind-the-scenes photos. 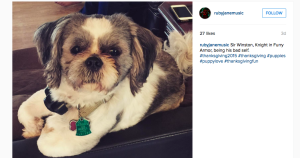 Austinites know Aaron Behrens from Ghostland Observatory and The Midnight Stroll, but not everyone knows about his other talent: scouting out the Internet’s buried treasures. His Twitter page is peppered with scientific discoveries, historical hidden gems, and mind-blowing images. Of course, his followers always get up-to-date information about upcoming concerts, too.

Alpha Rev is an Austin staple, so it just makes sense that their gorgeous photos and concert updates seep into your Twitter bloodstream. If you still need to reach your daily cuteness quota, the band recently posted a picture of Casey McPherson’s newborn daughter.

10) KP and the Boom Boom @KPBoomBoom

KP and the Boom Boom’s pictures completely sum up their groovy sound and energetic performances. When listening through your headphones isn’t enough, jet on over to their Twitter page and learn bout their latest gigs.