Philly’s Tierra Whack (yes, that’s her real name) was destined to experimental hip-hop freestyling. Whack loved Dr. Seuss so much as a kid that she rhymed her homework assignments. After an unsuccessful launch at age 15 as Dizzle Dizz, Whack released her 2018 debut album “Whack World” to critical acclaim, with each track clocking in at about a minute in length. Their accompanying short films were a social media sensation. Whack has continued to showcase her unique music through a series of single and video releases. Her latest, “Still”, was released earlier this year.

Amber Mark – Born in rural Tennessee to German and Jamaican parents, Mark’s childhood was nomadic and included a stay in a Darjeeling monastery in India. Since 2016, Mark’s huge soulful voice has filled her pop songs up, grabbing her fans and accolades. She’s currently releasing singles in anticipation  of her January 2022 album, “Three Dimensions Deep.”

Much like other siblings of New Orleans musical dynasties, Jon Batiste has achieved success on an entirely different level. Batiste records and performs with his band Stay Human, he won an Oscar for his score of Pixar’s ‘Soul’, and most visibly, he leads the band nightly on CBS’ Late Night with Stephen Colbert. He’s currently touring on the success of his new album, “We Are”.

The Austin duo of Ian Green and Daniel Sahad once used to entertain their friends, but quickly became known to Austinites as Nane. Their packed shows at Stay Gold, their John Speice-produced November 2020 debut LP, their KUTX Artist of the Month residency, and their new single, “Seventeen”, have all led to their debut performance at ACL Fest.

Austin mainstays Superfonicos pour on their energized Colombian funk/soul with dexterity and intensity on the ACL stage.

Born in Northumberland, Jade Bird moved all around Europe before settling in Wales, where she began writing songs. Pouring herself heart and soul into her 2019 single “Lottery”, she won national acclaim, a label deal, and eventually, a new home in Austin, where she first showcased her music during South by Southwest. Her latest album, “Different Kinds of Light”, was released in late 2020.

Bold, daring, explicit and commanding, Houston’s Megan Thee Stallion went from posting her own freestyling videos to SNL appearances and multiple BET and Grammy awards in just a matter of years. “I don’t feel like we ever really had a female rapper come from Houston or Texas and shut shit down,” she told Rolling Stone, and she continues to exactly that.

Existing somewhere between R&B, modern disco/funk, and bedroom pop, Bay Area native Remi Wolf makes a strong case that genre labels are useless in 2021. Language feels like an antique when describing her sound, so maybe check out her album art. It’s a whimsical assault on your eyeballs featuring digital phantasmagoria with the fidelity of a jpeg image compressed and shared thousands of times over. Inscrutable or unambiguously fresh? Probably both–you decide.

Like many millennials, 25-year-old Doja Cat is a cultural polymath–she also happens to be an incredibly talented musician and performer. Her music reflects a generation raised with easy access to an infinite variety of music, and whose tastes sprouted outside the snobbish tribalism sometimes encountered during meatspace music discovery (think Barry from High Fidelity). Effortlessly eclectic but a wholly original combination of parts.

Charley Crockett’s unadorned country success is anything but overnight. Growing up poor in the Rio Grande valley, Crockett did what he could to survive and stay out of trouble. He didn’t always succeed. In his early thirties, he decided to get serious about his musical hobby as a way to turn his life around. It worked. His independently-made records and quirky videos slowly found their way to fans. Wasting no time, Crockett has released ten albums since 2015. His latest is 2021’s “Music City USA”.

Formed by Gerrit Weimers, William Cashion, and vocalist Samuel Herring in 2006, the self-decribed “post-wave” Future Islands led a busy, hard-scrabble lifestyle until their new label 4AD landed them a national TV appearance on David Letterman in 2014. The YouTube video of their appearance, featuring Herring’s, um, bizarre, over-the-top stage presence, landed them millions of views and new fans. The Baltimore-based band released their sixth album, “As Long As You Are”, in 2020. 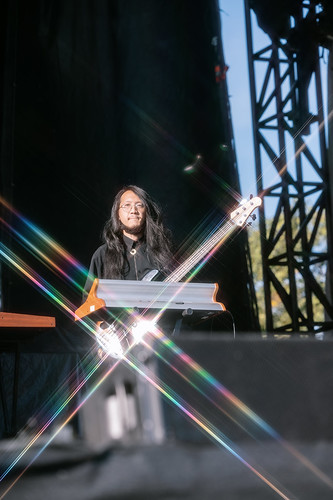 From the beginning, Moses Sumney has been the most unique of recording artists. Which makes sense considering his background – California-born but whisked off to live in his parent’s homeland of rural Ghana at age 10. Sumney is in some ways the ultimate outsider. Returning to the states, he resisted the label’s overtures and pursued a whispered and deeply felt brand of soul that over two albums, has won him legions of fans.

Riders Against the Storm – Friday

It’s been a little more than a decade since Riders Against the Storm arrived in Austin, but in that time, the husband and wife hip-hop duo of Chaka and Qui Dada have transformed the local music scene through their music, words and activism, winning multiple awards and quickly establishing themselves on the forefront. the rowdy “Diggy Dah” is their latest release. .

A hypnotic and riveting performer, Dallas native Erykah Badu pulls you inside her music without gimmickry. Outspoken and bold, her slinky, soul-baring R&B grooves hard and demands your attention; it’s why several decades into a career full of accolades, she is still so in demand as a collaborator, and back once again on the ACL stage.

Austin country group plays 1PM this Saturday at the Tito’s […]

Watch an intimate backstage video from of our very best […]